A Little Adventure on the Water 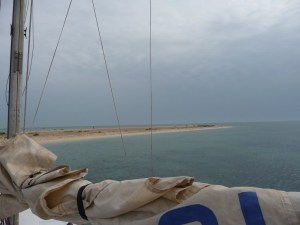 Morning on Bird Island
The day began ordinarily enough, waking as the dawn light filtered into the boat at anchor. Calm seas and hardly a breath of air. By 9am most of the crews were awake after the previous nights beach BBQ on Bird Island, a strip of sand some few miles off the west coast of Bahrain. It was boiling hot already. Bacon was cooked, Nynke towed into the shallows for a scrub and the guys set off in two dinghies to recover the daggerboard belonging to Eammons Jaguar which had broken its fixings in the approaches to the island. The water was chest deep but still it took some time to recover the board into the boat and rig up something to fix it in place.

Departure
Shortly after noon our little fleet of four boats started to head for home, the wind was still hardly enough to sail as Tradewind with owner Dominic and I on board followed Eammon out from behind the reef. Eammon’s little Jaguar was motoring whilst we hoisted our main and decided that as the wind was rapidly building to put up the smaller of the two genoas. In a matter of minutes the wind was blowing hard enough to require a reef in the main. We put the third reef in as there is a tear in the sail close to the second reefing point, by the time the task was done we were glad of this decision. Tradewind was hard pressed. The Jaguar was struggling with its small engine to make headway north east towards the mark “South Pole”, our turning point some two or three miles away before we headed north to the yacht club. Having overtaken the Jaguar we called the yacht club to ask for some help for him as Eammon was singled handed and then turned back towards the little boat to let him know.

Wind Rising
By now it was blowing hard some 20 or more knots on the nose (no wind instruments on board) which is a lot of wind for a 26 foot boat. The seas were building fast too in the gap between the mainland and the reef that Bird Island is part of. Still it was a warm wind and the sea was a fantastic turquoise colour, part of me was enjoying the sailing whilst the sensible part was informing me of the potential dangers. The wind continued to rise, Tradewind was now over canvassed so the genoa had to come off and Dominic turned on the outboard motor so we could make headway to windward. As we came off a wave the propeller left the water revving hard resulting in the heavy outboard twisting on its bracket – we could no longer use it. A launch from the yacht club came past and informed us that once they had dropped off Andy on the Jaguar to assist Eammon who by now was being swept southwards they would come and offer us a tow. With confidence we would be in the yacht club shortly the pair of us settled back in the cockpit.

Bare Poles
After half an hour or so we began to be worried for both of them, no sign of either boat (in fact we must have been swept of the launch whilst they were transferring crew as they didn’t see us on their return leg). The wind was increasing as was the wave height. Tradewind would not tack (turning the bow of the boat through the wind to change course) without a headsail up so we had to resort to the more dangerous jibe (turning the back of the boat through the wind rather than the bow) to keep us roughly moving east or west on station south of south pole, any northing was impossible. The waves were mostly on our beam and the boat was alarmingly rolled until her toerail was well down in the water on several occasions. Dominic tried the coastguard on his mobile phone but couldn’t get through and then called the yacht club again. They took our position and relayed it to the CG. By 3pm, we’d decided to run bare poles before the wind was a safer option in the increasing seas and took down the main. Already we were being swept south in what was now a gale with the wind whisking the tops off the waves.

An Afternoon At Sea
At least now the waves were either on our quarter or dead behind us. The lower washboard was in to prevent down below being flooded by the seas occasionally finding their way over the stern. Fluorescent orange lifejackets on with Jingo the dog lolling on a bunk below, we were comfortable and definitely not cold heading south at around two to three knots. Dominic ventured below to retrieve leftover samosa’s for lunch but they were unpalatable, we were imbibing enough salt than-you. Apples and water kept us going with occasional phone calls or texts to our contacts on land. The boat was sound and as long as we could stay with it we were secure. My only worry was a drying reef that the GPS chart showed some five or so nautical miles south of us but I refused to mentally calculate how much time we had, being swept southwards by the wind and waves at around one or two knots.

Mistaken Identity
The CG kept saying they could see us on radar in their station on land and were five minutes away. The time passed and we called them again, both mobile phones running low on battery (lesson number one is have a VHF on board). Each time the CG were contacted our position was passed and again we’d hear they were five minutes away, finishing off the call with “be safe”. Later we realised that they had first found Eammon & Andy and although they had our boat name had not checked which boat they were towing into a safe haven at Jau a few miles down the coast from the yacht club marina so thought their task was complete.

Heading South
Meanwhile looking at the GPS I could see that the wind and current were sweeping us between the next reef and the mainland which was a relief, we wouldn’t be shipwrecked as well today. Hopefully it would be calmer there, although there were various submerged rocks and beacons to avoid. I reckoned if we could get into shallower water we might just be able to anchor as I was worried about what would happen after dark and we had no idea how long this wind would blow for. I didn’t share my thoughts with Dominic.

Rescue Before Dusk
By 4pm the sun was getting low in the sky. Kevin called me from Oman, I summarised our situation and he called the YC with our position. Ben who had been co-ordinating things at the YC, realised the problem of mistaken identity and contacted the CG again sending us a text to say they were definitely on their way and some minutes later we saw their launch ploughing over the horizon. Relief! With some minor damage, incurred when a wave brought the two boats too close together so that their substantial bimini post caught our anchor, we managed to get a line from us to them relatively easily despite the rough seas and wind. Their landau style launch had high topsides providing them with a safe deep working area. Two powerful outboards drove them through the water.

The Worst Part – The Tow Home
The tow inshore across the waves and then back up the coast into wind and waves was horrid for both boats with huge snatches on the line from a Samson post on their stern to our anchor cleat. There was a deadly ripping sound at one point and the CG yelled “check your line”. Once more I ventured onto the bucking foredeck with a guardwire that doesn’t reach my knees, the sheath and some of the inner core of the tow line had parted (lesson number two ensure the crew has harness with some means of clipping on). I changed the rope for another, slightly dubious that it was going to be strong enough as the outer casing was very worn but it held all the way to Jau. There we tied up against a large rusting work barge that towered some eight or more feet above the boat. We shouted our thanks to our rescuers who still had to battle against the wind and waves back to their base north of the yacht club.

Dry Land
Vicci, Andy’s partner had driven down to collect us and was helping Andy & Eammon secure the Jaguar. In the dark she patiently listened to my yelled instructions (on deck we were in the lee of the barge but up there the wind was sweeping away everything we shouted up at her) and soon Tradewind was tied up. Dominic meanwhile had bundled the sails away below and worked out how we might get a medium sized dog up onto the barge. Up went Jingo in a life jacket which gave Andy, Eammon & Vicci purchase holds on him. Then it was our bags and finally us (the cool boxes left to moulder until we go back to fetch the boats). A large, still muddy tractor tyre did duty as a ladder. Step one was from the boat to the inner rim, then Vicci held Andy from behind and Andy unceremoniously hauled on our wrists until we were heaved up and over the top. Black from the tyre and rusty from the barge, caked with salt we were thankful to be back on dry land, hugs all round. Because this is Bahrain and not the UK there was no chill, no hypothermia just a group of grubby, salt encrusted yachties with another tale to tell in the bar.

Thank-You
Once back at the yacht club there was a short interview for each of us with Lieutenant T of the CG whose chief goal had been to emphasise that we should have taken more notice of the weather forecast before setting out from Bahrain YC that morning. Once we’d explained that we’d anchored overnight at Bird Island he shrugged his shoulders, understanding as a sailor that we all get caught out once in a while. His attention then turned to us, he needed some answers for his boss… were we injured, cold? No, only our pride. And how was the service his men had provided? We were very grateful for everything they had done. And thank-you too to everyone at BYC who played a part in our rescue.