Not much time to post over the last week or so as it was the BYC’s Autumn regatta at the weekend and early on Thursday our first guests to stay with us here in Bahrain, Kevins parents, arrived.

I seem to have been standing in the wrong place when they were looking for a volunteer to organise the Autumn Regatta. For a variety of reasons not worth mentioning here, no one had done much to plan the regatta as I discovered when I returned from the USA in September. The Cruiser Fleet Captain then resigned and I, as the recently appointed Cruiser Fleet Race Officer, somehow found myself organising an event I’d never previously attended, in a club I’ve been a member of for only a few months. Anyway it went without a hitch although there could have been a tad more wind on Saturday and I’d recommend you don’t try leaving it until Wednesday afternoon to order trophies for an event starting on Friday morning. Wednesday I was more than a little stressed but the lovely man in Castelsports is a hero working late to get me trophy printing proofs to approve that night.

With the help of one of the Bahraini members I was put in touch with both of the local English language papers and Bahrain Radio. The main paper GDN ran an ad and an advertorial piece (300 words written by your truely) on the Monday before and a small ad on the front page on the day before. On the first day we got 17 boats on the water, an assortment of IRC and Club Handicap yachts plus some Beach Multihulls (mostly Hobies), about 40 competing crew all told. The club’s Sailing Instructors aided by the UK’s Naval Attache ran the committee boat for all three races.

Kevin & I’s river sailing skills were put to good use in the light winds. The two of us sailed her just like an overgrown Enterprise with a spinnaker, it was hard work and I have a full complement of boat bites on legs and arms to show for my efforts. Having worked out the results afterwards and run the daily prize giving (a bottle of wine for the class winners of each race) I was pleased that Shawa’al the smallest and potentially slowest boat in her class had managed to win three bottles of white wine for sweeping the board in Club Handicap!

When everyone had gone home after the Halloween themed party (DJ on the beach stage, haunted house in the conservatory), I headed home with my laptop and phone. I’d already recorded one radio interview for Bahrain Radio but there were the days results to despatch to the sports editors. I collapsed exhausted into bed pleased that everyone had had a great day, I was too tired to even open one of our prize bottles.

Day two, Saturday, dawned flat calm with little wind in the forecast. The Officer of the Day Ben and myself choose to go the optimistic route of believing the the forecast with the most wind (well you do don’t you?). Ben’s experience of the week’s weather so far was that the wind would build during the morning. I was though a little puzzled by the white fluffy stuff appearing in blobs over head, haven’t seen any of that for months here! Was the weather about to undergo a serious change? No it turned out successive days have been hot and sunny.

The AP went up just before the Skippers Briefing at 9am and hung like a wet rag along side the drooping RYA flag on the pole by the swimming pool. Briefing over Kevin, I and the recently arrived outlaw’s sat in the club’s conservatory eating a late breakfast and joy of joys, watching the ripples in the flag grow stronger. By 11 it became clear we’d have enough beeze to race today’s planned triangular course (yesterday’s were windward/leeward ones) and by 11:40 the IRC & Club Handicap boats had started and the multihulls were gently sailing up and down the line as they patiently waited for their starting signal.  Looking back I think I may have caused some sort of revolution running two five minute start sequences back to back but after all the races everyone seems to have cottoned on to what the flags mean and what order they go up in. Will they remember in six months time for the next regatta?

The first leg was painfully slow, and could hardly be called “racing”. Kevin had messed up the start as a big windshift left us the wrong side of the outer distance mark but at last we were on course side and sailing. Three laps later we had been lapped by both the leading boats in our class, all of the IRC fleet and the multihulls but little Shawa’al was still ahead of the remaining four (larger) boats in her class. With one last lap to go Ben came over in the rib to inform us the time limit was imminent. We’d calculated we needed a finish to win the regatta so we stubbornly kept on going, the wind had risen just a little and the boat was making ground against the tide. If it held up we might be able to complete the short course in the last fifteen remaining minutes. Nope, approaching the last gybe mark we heard the horn, times up. Shortly afterwards racing was abandoned for the day, the glassy smooth water testament to the lack of beeze.

Once the boat was tidied up and the big genoa folded away I was back at my laptop calculating results. The IRC and multihull winners were clear but three boats in Club Handicap had 10 points. That meant Shawa’al with her three firsts on Friday was victorious even though we scored a DNF today. One of the large circular crystal plaques I’d rushed around getting done last week was coming home with us, a permanent reminder of all our efforts both on and off the water. Then it was time to shepherd sailors from around the beach bar into some sort of order to get photos taken by Bahrain Confidential magazine and the GDN photographer too.

Being Halloween a pumpkin carving challenge on the beach came next, with various teams competing to create the best looking hollowed out watermelon! Yes watermelon – huge green melons with succulent pink flesh are grown in Saudi and much cheaper than imported pumpkins. 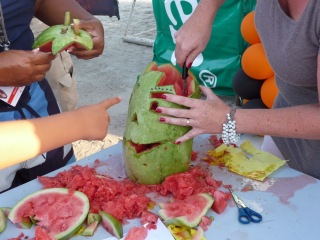 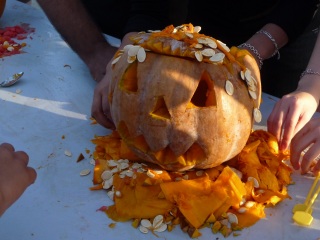 After all that mess and fun the prizegiving. Bottles of wine for Saturday’s class winners then third, second and first place trophies for each of the three classes overall. Finally, Dom was awarded a “Conspicous Seamanship” prize for catching the gybe mark around his rudder on the penulitmate lap and having to dive over to free it! All the crews on the prize winning boats received “gold” medals to reward them for their part in their skipper’s success too. And I must record my thanks to Joanne and Ben C for the lovely flowers, our apartment smells wonderful.

Then it was time to go home but not to rest…another hour or so’s communing with the sports editors to ensure they’d got the overall results and an overview of the days sailing. I was pleased to see two good write ups on Sunday morning of the regatta and amused that neither journalist had been anywhere near the water all weekend!