During our weekend camping and driving trip across the Liwa Crescent from West (Arada) to East (Qasar Al Sarab/Hameem) one of the group managed not only to get stuck in a bit of an awkward dip but also to pop a tyre off the rim in the process. Here is how the team sorted out the recovery, but first a closer view of the problem: 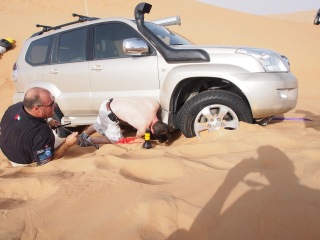 First task; get a jack under the car to support its weight. Ian had to dig away and then level the sand under the Prado to get a jacking board (the red object near his shoulder) under first. Then the jack went in and was raised until it took the weight of the car but ensuring it wasn’t lifted any further due to the precarious angle everything was perched at.

Job done – all that remained later (ie on the way home) was to find a garage where the tyre could be taken off the rim once more to remove the kilos of sand which will be inside. If you don’t then at speed the wheel will be unbalanced. Fortunately many of the major service stations in the Emirates have tyre workshops and Ian dived into one off the E11 on the drive back to Dubai.

With thanks to Ian, Clive, Antonio, Juan-Carlos, Ricardo & Mark for one last great weekend in Liwa.