On the chart to the north east of Tobermoray and Mull is a long, winding inlet, Loch Sunart. This body of water heads almost due east for about twenty miles and its head is within a few miles of Loch Linnhe where Temptress was last week!  The navigation is a bit tricky requiring the crew to be on full alert due to odd rocks out in the channel (we’d heard a distress call from a yacht that suspected they’d hit one to the west of Risga on Saturday and seen that boat towed in by the life boat later in the day). To add to the complications there a couple of narrow spots where the tide runs hard. We have paper charts, electronic charts and the Ordinance Survey maps on a hand held GPS and despite the dangers were tempted by the prospect of a day of pilotage, something different to exercise the brain. 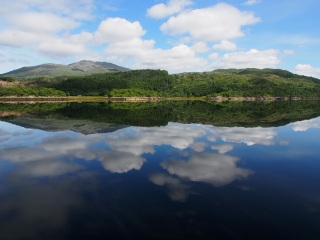 The land either side of Loch Sunart is mountainous, above the tree line bare rock, bracken and heather and with the sun shining it is glorious. There was little wind so the whole trip was made using the engine, identifying the landmarks on the chart and picking our way from one leading line to another. At the top of the almost an island of Oronosay (it’s connected to the mainland at low water) we headed south west close inshore to avoid the perils of the triangular Risga which hugs the north shore of the loch, then turned north east along the Carna shore (not too close in as it too has some outliers) to avoid Broad Rock which lies just below the surface midway between Risga and Carna.

Once past Risga’s unmarked dangers the next stretch in a long V south then north to Salen Bay was relatively straightforward. The inside corner on the north shore had various rocks but by going deep into the bay on the southern side close to the huge fish farm we were well clear of them. Glencripsdale House on the Morven side (our right hand side or south shore) was a vast pile painted white with dark slate roofs, it had possibly been a simple double fronted house at one time but extended several times now is a large mansion surrounded by flat meadows, very pretty but seemingly very inaccessible except by boat. On the other shore Camasinas was less than a dozen twentieth century bungalows with slipways down to the loch, one with a yacht drawn up on the drive. The hills rose up steeply behind, a road wound its way along this shore all the way to the head of the loch.

We ignored the attraction of the tree fringed Salen Bay with a pub, pontoon and moorings but headed into the north shore just beyond to line up the transit of South House with a headland beyond the bay (a back bearing of 275 degrees, ie a bearing viewed looking back over the stern) that would keep Temptress clear of the rocks on the south shore of the next sweeping bend as the loch turned south east again. By the camp site full of campervans another transit, this time line up an old stone bridge and a farmhouse bearing 339 to clear the eastern edge of the rocks. Two more short transits took us safely between a pair of unmarked, unnamed rocks south west of Eilean a Chuilann and into the Laudale Narrows where the loch is squeezed even further between the islands of Glas Eilean and Eilean Mor to the north and Rubh nan Clach point to the south. After that the last couple miles, due east are free from any rocky dangers and Temptress motored to Strontian at the head of the loch where we dropped the hook for a late lunch of pasties and beans and a spot of unproductive fishing.

After lunch we thought of going ashore but it started to mizzle.  With roads on three sides the anchorage didn’t encourage us to linger for a night there. Strontian is though the village where the element of Strontium was discovered in the 18th century and has a forest walk with all sorts of exotic trees so might have been worth exploring but we saw a only the few houses on the loch shore, the main village being tucked away up a valley. Whilst in Tobermoray, the skipper of a charter motor boat had told us of a very quiet and beautiful loch way back at the entrance to Loch Sunart we decided to spend the night there instead. Time to pick our way back, this time it should be slightly easier as we had managed to identify all the landmarks for the transits on the way in. The bearings would all now be courses ahead, not looking back over our shoulder and we’d had the foresight to mark each turn on the approach and through the Laudale Narrows as a waypoint on the hand held GPS (our desert driving experience coming into play!). So Kevin steered mostly to the hand held GPS’s compass direction to the next waypoint (over twenty of them) for the initial part of the return trip then we went back to the more traditional charted transits and finally some close attention to our outward track to avoid the rocks off Risga.

Our destination lay to south of Oronosay through a narrow channel below the island’s western shore on our left) beneath the towering craigs of Torr Nan Con on the mainland (to our right). The entrance to Loch Na Droma Buidhe (a tiny picture postcard loch with a very grand sounding name) is fairly straight forward although you can’t turn to port too soon as another unmarked rock lurks just beneath the surface on the mainland side.  After a couple of afternoons watching other boats arrive we soon recognised the local boats arriving; if our anchorage was their target a smart U-turn had them take the shortest distance around the rock whereas most other boats including ourselves headed down the pool some way before turning left not heading up until sure they were well clear of any danger. We took the dinghy over to the area at half tide but failed to spot the outlier beneath the surface only seaweed.

The shores are mostly rocky, when the tide goes out there is a wide fringe of seaweed below some three or more metres of pale granite. Oronosay, though rugged (just granite outcrops, heather and bracken) is not very high however it is very steep to at its waters edge, you could almost touch the rocks from a yacht at high water, a tidal range of over 2 metres means mooring tied to the rocks Norwegian style isn’t practical. The mainland shore though has a few spots where streams tumble down from the mountains above creating beaches of black sand and rough shingle. It is possible to land a dinghy and from one of them a path through chest high bracken leads to a track that heads up the hillside and over the top to the village of Drimin overlooking the Sound of Mull, some 5 kilometres as the crow flies up and over the mountain but probably three or four times that if you follow the track round the headland of Auliston Point.

On Tuesday afternoon after a morning of boat chores we found it was an extremely pretty walk up through the trees to the highest point on the track with spectacular views east along Loch Sunart and down into Loch Teacuis below Carna Island (not accessible by anything with a keel) and our own anchorage, Loch Na Droma Buidhe.  Someone has thoughtfully provided benches at a couple of the best viewpoints and there is a lovely old wooden bridge smelling of tar in the heat of the sun over a waterfall on the way up through the trees. Lots of birds too, we saw our first Stonechat with its black head, reddish breast and odd “weest-trak-trak” alarm call (note to self – take bird book on walks as well as binoculars!).

There must have once been a small settlement just below Torr Nan Con judging by the ruins we saw on our walk. Around them were flat meadows with orchids and many other plants growing in the grass, probably very fertile soil for vegetables and other crops. No sheep or cattle grazing today but from the modern fences preventing a long drop into the trees below animals are obviously grazed here regularly. It would have been an amazing if isolated spot to live with mountains rising up from the sea and rocky islands dotting the clear blue water all around. In the far distance looking north through a gap in the mountains of Arnamurchan (mainland Britain’s most westerly point and cosily familiar to all who listen to marine weather forecasts) we could spot two blue-grey cone shaped outlines, The Cullins on Skye?

Then the fog which had threatened all day and was still hanging around below us in the Sound of Mull began to roll back in rising up toward the headland. Time to head back down to the boat and supper.

PS: Still no internet so will update when we can, hopefully later on Wednesday if the fog clears and Temptress can anchor again in Tobermoray as we need supplies too. Not even a phone signal in the anchorage here and with no VHF weather forecast at 07:10 on Wednesday morning due to Stornaway coastguard casualty working we felt really isolated in the silence of thick fog.