A So So Day Out

Having arrived at the island of Singapore, dropped the metaphorical hook and sorted ourselves out, our natural next step is to explore wherever it is this pair of globetrotting sailors have washed up. And preferring to avoid the usual tourist traps, posh hotels, brunches etc we recently decided to visit Jurong Bird Park located deep in the western industrial area of Singapore.

Getting there was an easy trip along the PIE (the Pan Island Expressway). Finding somewhere to park was another matter as the signage got you off the main road but missed the last vital step of an immediate left turn; we found ourselves heading up the hill above the park. Nice views of the Jurong shipyards from below the satellite station! Eventually we realised what looked like a lorry park exit was also the carpark entrance!

The park itself nestles on the hillside wth lots of ponds, enclosures and a huge walk-in aviary complete with 100 foot waterfall. Apart from the penguins who were a sorry looking bunch mostly interested in their compatriots staring at them from the mirrored wall, most of the birds were from Asia and therefore exotic – Jurong’s claim that it is “where colour lives” is indeed true. NB: Do penguins do anything other than stand around in large huddles anyway? 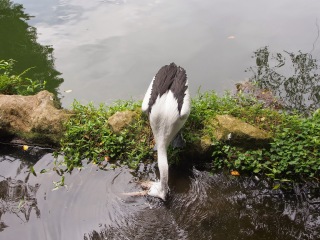 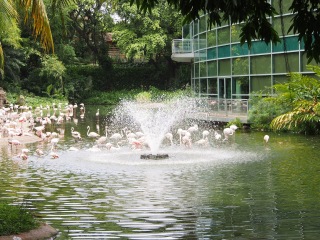 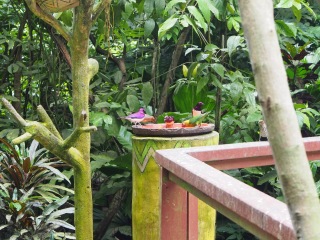 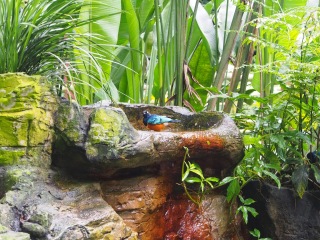 Our tactic of arriving just after mid-morning and leaving when extreme hunger set in during the early afternoon meant we missed all the shows – parrots feeding, hawks flying, pelicans being fed and so on.  Despite this we enjoyed our walk especially in the big jungle filled aviary where the punk pigeons, the purple finches and the brilliantly coloured starlings kept us entertained. Setting a bird park in a tropical region is genius – the exotic rainforest plants with their blowsy blooms and generous greenery make a superb backdrop for the splashes of colour of feathers of every hue. Seeing lovebirds not paired up on a perch in a UK petshop, but flying freely back and forth from a bird table covered in fruit and seed was a treat with their trim colouring and beady white rimmed eyes – they do look like they have been painted. The flamingoes splashing through the fountain and sifting the mud around the lake shore looked completely at home even though they are normally found in much drier climes.

However when it came to feeding ourselves we discovered that the food on offer was, like many an attraction the world over, mediocore at best. The big bowls of luke warm laksa, Singapore’s national dish were a travesty, one prawn, tastless noodles and little of the coconutty spicyness that makes this a favourite comfort food everywhere on the island. As we ate we realised many of our fellow diners were leaving their food almost untouched. Next time we’ll come earlier or later to catch the morning or afternoon shows and plan to eat elsewhere.