On arrival in St Lucia we would have sworn we’d landed in Ireland by accident. The skies were heavy and grey, the morning cruisers net (vhf68 at 08:30) yielded a scanty forecast for light showers seemed at odds with what the clouds foretold. And by mid morning the heavens had opened with a succession of downpours interspersed with light showery rain.

Whilst checking us in at customs and immigration Kevin (only the skipper can go ashore to do this, heavy fines for those boats who permit their crew to wander ashore before formalities are complete) was informed the weird weather was due to a volcanic eruption further north. With our internet connection aka Kevin’s phone charging we remained at a loss as to a) know what the weather forecast actually was from a sailors perspective in terms of wind knots and direction, weather fronts etc and b) what volcano it might be though Monserrat somewhere north of St Lucia sprang to mind. Instead we postulated that it was Erica’s reading of books on how to use a sextant and her intention to practise taking sun sights that had influenced the weather gods, either that or they thought the three of us might be missing the UK winter!

A few hours later we were able to satisfy ourselves that no major volcanic catastrophe was on the horizon, or if it was no news service had picked it up as yet and that the  rainy weather was down to a ridge of high pressure further north; according to NOAA’s offshore waters forecast. 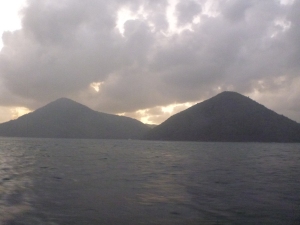